The guidelines for development and operating of enrolment schemes are issued under section llG (3) of the Education Act 1989 for the purpose of describing the basis on which the Secretary's powers in relation to enrolment schemes will be exercised.

All students who live within the home zone described below (and shown on the attached map) shall be entitled to enrol at the school.

From the bridge crossing on the Eastern Taupo Arterial Road (State Highway 1 and 5) that crosses the Waikato River, the zone boundary travels south along the western bank of the Waikato River to 178 Huka Falls Road.

The zone boundary then crosses Mapara Road and travels in a south-west direction to the edge of Lake Taupo approximately half way between Tahunatara Point and Mine Point 34 Kaiapo Road is within the zone, other addresses on Kaiapo Road are outside the zone.

The zone boundary then travels west along the lake edge to the mouth of the Okaia Stream, west of the Kinloch township, turning inland along Okaia Stream to 876 Whangamata Road, and then continues north to 1800 Poihipi Road. From 1800 Poihipi Road the zone boundary travels north-east, crossing Forest Road at number 441, and continuing north-east to Mt Maroanui. From Mt. Maroanui the zone boundary travels east to the intersection of State Highway 1 and Valley View Lane, including all addresses on Valley View Lane. It then travels north along State Highway 1 to the intersection with Tutukau Road, and includes 2411 Tutukau Road.

The zone boundary then follows the west bank of the Waikato River to the bridge crossing on the Eastern Arterial Road (State Highway 1 and 5).

Out of Zone Enrolment

Each year the Board of Trustees will determine the number of places which are likely to be available in the following year for the enrolment of students who live outside the home zone. The Board will publish this information by notice in a daily or community newspaper circulating in the area served by the school. The notice will indicate how applications are to be made and will be a specific date by which all applications must be received.

Applications for enrolment will be processed in the following order of priority:

If there are more applicants in the second, third, fourth, or fifth priority groups than there are places available, selection within the priority group will be by ballot conducted in accordance with instructions by the Secretary. Under Section llG (1) of the Education Act 1989. Parents will be informed of the date of any ballot by notice in a daily or community newspaper circulating in the area served by the school.

Applicants seeking second or third priority status may be required to give proof of a sibling relationship. 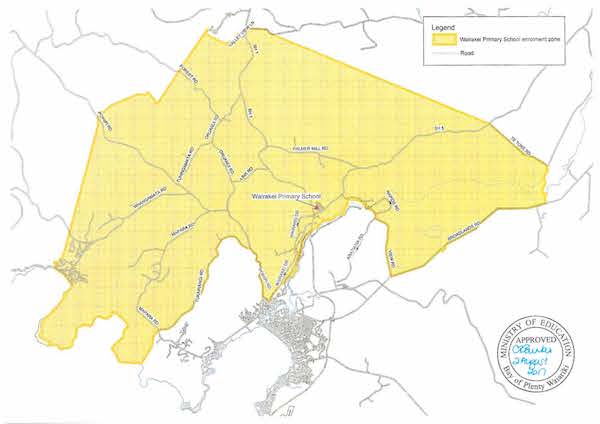